Apparently they called this guy 'Earache'

Well, I'm pleased to announce that my C46 collection has doubled in size! I haven't been aggressively pursuing this set (there are some pretty high grade C46 Toronto players on eBay right now, but at $100 a pop, I'm not interested), but I do look now and again to see if any reasonably-priced C46s are up. I got lucky last week -- as I managed to score my second C46 for a reasonable price, and, from a Canadian seller. It's not very often that it works out that way for me. 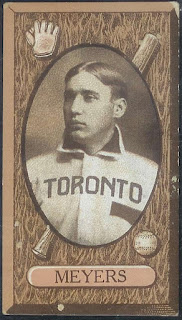 The new addition is utility player Benny Meyer, though his C46 lists is name as Benny 'Meyers'. I've known of Benny Meyers for years, but to be honest, I'm only now learning about Benny Meyer. My awareness of the player stems from just knowing about the C46 set, but until researching him right now, I didn't even know his name was *really*, Meyer. Sorry about that, Benny.

Now I know a whole lot more. Bernard Meyer was born in Hematite, Missouri in 1885, and had a pretty lengthy playing career. It spans 21 years, though there are a couple of years in there he wasn't playing. Between 1904-1912 he played in the Iowa League of Professional Baseball Clubs, the Texas League, the American Association, the Eastern League, and then, in 1912, the International League, with Toronto, which is the feature of this card. Benny appeared in 134 games in Toronto that year, and batted an impressive 0.343, according to Baseball Reference. Meyers played with Toronto again in 1913, but that was the year he finally broke through to the big leagues, where he played 38 games with the Brooklyn Nationals. His timing worked out well in a baseball card sense, because he was around at just the right time to be included in the T200 set. In 1914 and 1915 he played in the Federal League (Baltimore in 1914, and then Baltimore and Buffalo in 1915). Though he appears to have played the entirety of both seasons, he didn't land on a Cracker Jack, unfortunately. He did, however, manage to score a place in the 1914 Baltimore News set. If you're not familiar with that set, you should check it out. It contains a fairly significant minor league card of a guy named George Herman Ruth.

From 1917-1919, Meyers bounced around between the Southern Association, the Western League, and the Southwestern League, before playing his last games in 1925 with the Philadelphia Nationals.

After his playing days ended, he coached briefly, first with the Philadelphia Nationals, then in 1929, the Detroit Tigers. It is here, it seems, where he scored himself the nickname 'Earache." According to the June 6, 1929 edition of the Sporting News, Meyers joined the Tigers at the request of Bucky Harris to help bring the energy level up at Tigers games like Hughie Jennings used to. Describing Meyer's loudness and energy, the article states: "Benny carries his own hookup and has a range of up to and exceeding 1,000 cycles." It further notes that some of the cruel gentleman that have heard him have nicknamed him the "earache".  "It doesn't matter what the situation or out look may be, Benny stays with 'em. He raves, rants and hollers. Then he hollers some more."

In 1945 he managed the Grand Rapids Chicks of the All-American Girls Professional Baseball League.

And all that, learned from buying a baseball card. Man I love this hobby.

Followers of this blog